England are ‘not playing as well as… 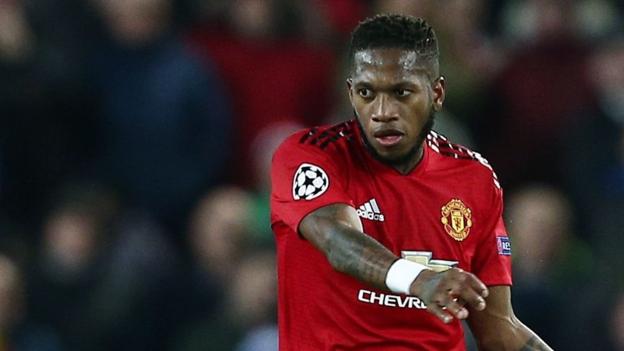 Manchester United manager Jose Mourinho says he is reluctant to pick summer signing Fred until his side are “defensively stronger”.

The Brazil midfielder became the club’s fourth most expensive signing of all time when he completed a £47m move to Old Trafford this summer.

The 25-year-old was not included in Mourinho’s injury-hit squad for United’s midweek draw with Arsenal.

“Step by step,” Mourinho said about Fred’s progress on Friday.

“You also have other players in other clubs that needed their time, and you have some of them that played even less than Fred.

“When the team is defensively stronger and doesn’t need people in midfield that are more worried about giving some balance to the team than being involved in creation and attacking dynamics, I think the horizons for Fred change completely.”

Having conceded 10 goals at home in the Premier League, United have already let in more goals at Old Trafford than they did in the entire 2017-18 season.

Mourinho’s side have a short turnaround following Wednesday’s draw with the Gunners, hosting bottom side Fulham on Saturday (15:00 GMT), but the Portuguese insists his side will have “no excuses”.

The former Chelsea manager was also full of praise for his predecessor at Stamford Bridge, Claudio Ranieri, who guided Leicester to the Premier League title in 2016 and will be in the away dugout on Saturday, having been appointed Fulham manager last month.

“[Fulham have] one of the two most important managers in the history of the Premier League, so they have the potential to come here tomorrow and to give us a very difficult match,” said Mourinho.

“The position and the number of points in the table sometimes doesn’t say much about the real potential of the team.”

Women’s World Cup draw preview – can England and Scotland be drawn together?