It is frustrating when players choose T20…

Fixtures, kick-off times, how to watch and…

Australia all-rounder Green has ‘outside chance’ of…

“Important” for London Broncos to have a… 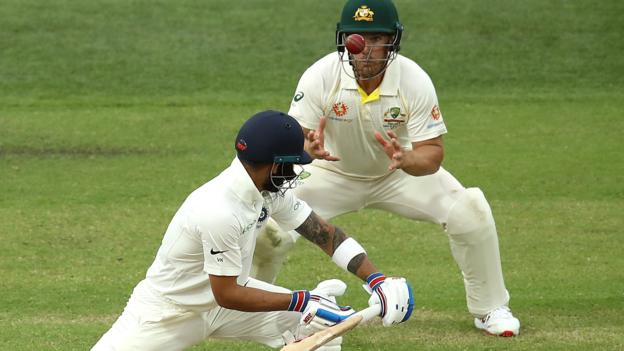 India took control of the first Test against Australia with a gritty batting display on the third day in Adelaide.

But they lost captain Virat Kohli late on for 34 – caught at short leg off Nathan Lyon – to give Australia hope.

KL Rahul, who scored twice as fast as his fellow opener, fell for 44, caught by wicketkeeper Tim Paine while trying to drive a Josh Hazlewood delivery.

Pujara and Kohli dug in, adding 71 runs for the third wicket in 33 overs, repeatedly using their pads to deflect spinner Lyon’s deliveries.

But the Australian was finally rewarded when Kohli prodded forward and edged to Aaron Finch on the leg side.

Earlier, Lyon had frustrated India’s bowlers, putting on 31 for the ninth wicket with Travis Head after Starc had added seven to his overnight total before being caught by Rishabh Pant off Japsrit Bumrah.

Head, making his home debut, top scored with 72 before edging Mohammed Shami to Pant and the Indians combined again to remove Hazlewood for a first-ball duck to give the wicketkeeper his fifth catch of the innings.

This was a day for the purists, not the Twenty20 generation.

It was slow and attritional cricket, but it was also a masterclass from India in how to grind out a position of supremacy on a stodgy pitch.

As Kohli and Pujara used their pads to negate the threat of Lyon in the afternoon session, the crowd responded with a slow hand clap.

And although Lyon did finally snare Kohli late in the day, by then India had assumed control.

Australia will need early wickets on day four if they are to fight back into contention in this absorbing match.

Wimbledon quiz: What do you remember about the 2019 championships?