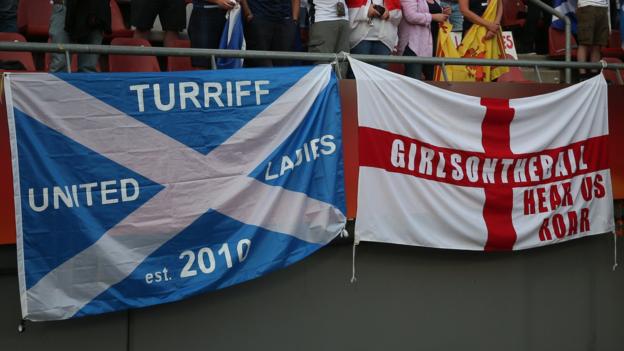 England and Scotland have been drawn in the same group at next summer’s Women’s World Cup in France.

Japan, World Cup winners in 2011 and runners-up in 2015, and Argentina are the other sides in Group D.

Scotland, who are making their first appearance at the World Cup, will meet England in Nice on 9 June in what is the opening game for both countries.

Holders the United States will begin their defence against Thailand, ranked 29th in the world, on 11 June.

Chile and Sweden are also in Group F along with the US for the finals, which are staged from 7 June to 7 July.

Hosts France launch the tournament against South Korea in Paris, with Norway and Nigeria the other countries in Group A.

England and Scotland met at Euro 2017, with the Lionesses winning 6-0 in Utrecht.

Phil Neville’s Lionesses are making a fifth World Cup appearance after finishing five points clear at the top of their qualifying group.

Scotland, under head coach Shelley Kerr, finished two points ahead of Switzerland at the summit of their qualifying group.