Jonny May v Louis Rees-Zammit: Who will…

Max Verstappen ‘realistic’ about his chances of… 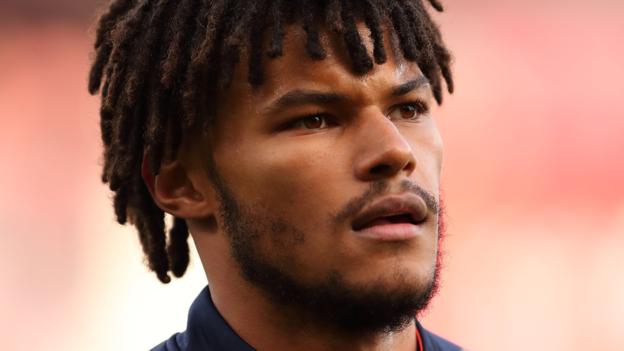 Bournemouth’s Tyrone Mings has pulled out of an interview with Talksport in protest at its coverage of the alleged racial abuse of Raheem Sterling.

Former Reading striker Dave Kitson told the station that Sterling had incited “jealousy” by exhibiting a luxury lifestyle on his social media.

Kitson added that there was “no excuse whatsoever” for any abuse.

“Like someone or dislike them, there is no ‘but’ or grey area when it comes to racism.” said Mings on Twitter.

“I’m fed up of broadcasting channels who have a huge voice allowing this.

“Silence is deadly for stations and outlets who rely on viewers and listeners.”

BBC Sport has contacted Talksport for a response while Mings declined a BBC Sport request for an interview.

Ex-Fulham and West Ham striker Leroy Rosenior, who has written about the racist abuse he received in his playing career, called Talksport to challenge Kitson’s comments on air.

England international Sterling, 24, was allegedly racially abused during Manchester City’s 2-0 defeat against Chelsea at Stamford Bridge on Saturday. Chelsea and the Metropolitan Police are investigating the allegations.

Four people have been suspended from attending matches at Stamford Bridge while the investigations continue.

Sterling said he “had to laugh” when he heard the alleged racist remarks during the game because he does not “expect any better”.

In an Instagram post, Sterling said newspapers are helping to “fuel racism” by the way in which they portray young footballers of different backgrounds.

Defender Mings told The I in January that he regularly encountered racist abuse online, adding “people think they can get away with things on social media that they wouldn’t get away with on the street”.

The Professional Footballers’ Association has said that some press coverage of Sterling “emboldens racist rhetoric”.

Sterling was the victim of a racist attack in December 2017 outside Manchester City’s training ground, for which the man responsible was sentenced to 16 weeks in prison after pleading guilty.

Skateboarding: How to do kickflips with Alex Decunha