Formula 1 team McLaren to race in… 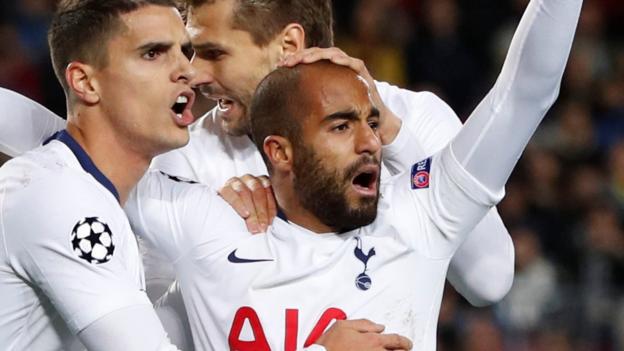 Tottenham achieved “mission impossible” by qualifying for the last 16 of the Champions League, according to manager Mauricio Pochettino.

Lucas Moura’s 85th-minute equaliser earned a priceless point at Barcelona, as Spurs completed an unlikely turnaround in Group B having collected only one point from their first three games.

They needed to match or better Inter Milan’s result at home to PSV Eindhoven and had faced elimination when Mauro Icardi cancelled out PSV’s early goal.

Moura’s goal swung the advantage back in Spurs’ favour but an agonising wait followed before it was confirmed Inter had failed to find a winner against the group’s bottom side.

“I am so happy for the fans – this is a massive, massive achievement for the club,” said Pochettino.

“We suffered because when we finished the game we did not know the result at Inter. It was two very difficult minutes, but in the end of course we were so happy. It’s so important for the club.”

The Premier League side had gone behind to Ousmane Dembele’s early strike but then peppered Barcelona’s defence with wave after wave of attacks, with both Harry Kane and Son Heung-min going close.

They finally made the decisive breakthrough five minutes from the end when substitute Moura, who moments earlier had a header cleared off the line, fired in.

Spurs become only the eighth side to qualify from the group stage after claiming only one point from their first three games.

Had Pochettino’s side been eliminated they would have looked back with regret on only beating Barca goalkeeper Jasper Cillessen on one occasion.

The Dutchman, who replaced first-choice Marc-Andre ter Stegen, was exceptional throughout and his clawed save to keep out Moura’s earlier effort came after superb stops to deny Son and Christian Eriksen.

Kane was also denied by the makeshift Barcelona defence when his header was cleared off the line by Miranda.

But, like the rest of his team-mates, Kane persevered and with time running out his pinpoint cross found Moura whose first-time finish sealed Spurs’ qualification – an achievement that seemed so improbable just a few weeks ago.

Pochettino added: “I always believed it was possible to win the game. We produced a lot of chances.

“But after we missed so many we thought maybe it was not our night. We fully deserved to go through with Barcelona. We were the best teams in a difficult group.”

Not the ideal start for the visitors

Tottenham fans had wished to see Champions League football at their new home this season, but the likelihood of that appeared increasingly more distant after the first three games of their campaign.

A 2-1 defeat at Inter came before a 4-2 humbling at home by Barcelona. And when they only managed a 2-2 result at PSV, it seemed game over.

But then came a flicker of hope with victory against PSV before a 1-0 win at home to Inter.

Barcelona had already qualified and expectedly named a weakened starting XI, with Lionel Messi, Gerard Pique and Jordi Alba all starting from the bench.

However, before Tottenham had a chance to test the inexperienced line-up they suffered a setback when Dembele scored a brilliant solo goal.

The Frenchman, who cost Barcelona £135m in 2017, robbed Kyle Walker-Peters of the ball at halfway, drove towards goal and cut inside the desperate lunge of Harry Winks before sliding his shot under Hugo Lloris.

The home side went close to a second a handful of times with Philippe Coutinho twice hitting the post with low efforts before Walker-Peters made a brilliant block to deny the Brazilian.

Messi was brought off the bench in the second half but he failed to make an impact, much to the delight of the visitors.

Bradford 4-4 Peterborough (2-3 on penalties): Visitors through after incredible cup tie

Euro 2020: Glasgow and Dublin at risk of being cut from host cities

Will Addison: Ulster back does not regret fitness gamble despite Six Nations blow